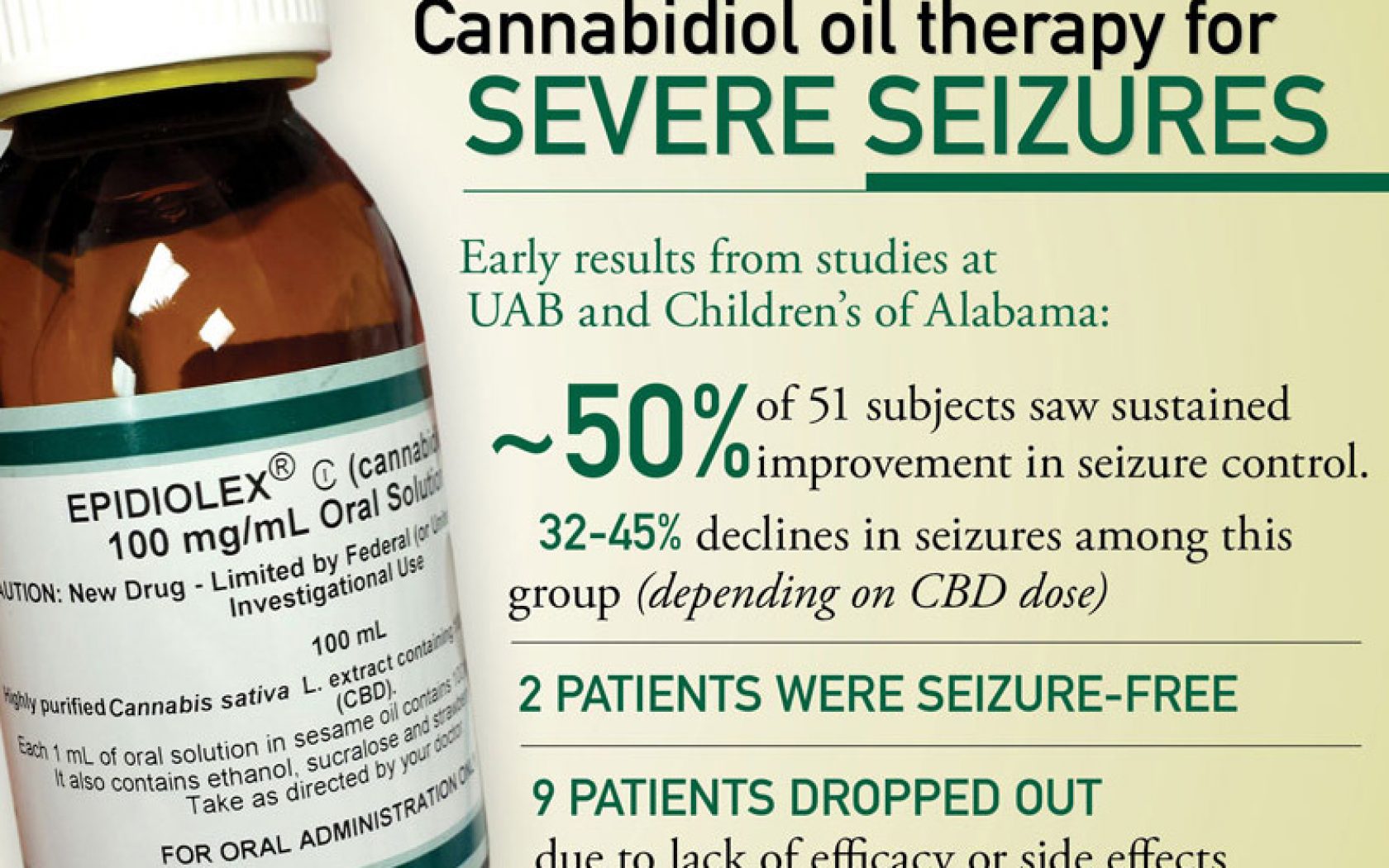 Hopegrown note: The preliminary findings of this ongoing study by UAB are incredibly encouraging! We're already aware of many amazing case studies, thanks to parents who have been willing to try anything to help their children who have been suffering from debilitating seizure disorders. However, many more parents are frightened by the thought of giving their child a Schedule 1 substance, which makes studies like this so important. Once there is strong scientific evidence to back up the anecdotal medical miracles, parents may give CBD oil a try before resorting to prescriptions with horrible side effects and withdrawal symptoms like Valium.

Investigators with the University of Alabama at Birmingham Cannabidiol Program will present the first results drawn from the CBD oil studies underway at UAB and Children’s of Alabama. Three abstracts will be presented at the annual meeting of the American Academy of Neurology in Vancouver, Canada.

The abstracts describe results from the first 51 subjects enrolled in the studies. Among other findings, the researchers report that approximately 50 percent of the subjects responded to the CBD oil therapy with overall sustained improvement in seizure control over a six-month period. Seizures declined between 32 and 45 percent in the responders, depending on the CBD dose. Two patients were seizure-free, and nine dropped out due to side effects or lack of efficacy.

UAB launched the studies of CBD oil as a treatment for severe, intractable seizures in April of 2015. The studies, an adult study at UAB and a pediatric study at Children’s of Alabama, were authorized by the Alabama Legislature in 2014 by legislation known as Carly’s Law.

The studies are designed to test the safety and tolerability of CBD oil in patients with intractable seizures. CBD oil, a derivative of the cannabis plant, is delivered orally as an oily liquid.

“The studies are ongoing, and we have a lot more to learn; but these preliminary findings are encouraging,” said Jerzy Szaflarski, M.D., Ph.D., professor in the Department of Neurology, principal investigator of the adult study. “Among our goals was to determine the safety of CBD oil therapy, and it appears that, in many cases, patients tolerate the oil quite well. The evidence of seizure reduction gives us hope that, the more we learn about CBD oil, the better we will be able to tailor this therapy to provide relief for those with severe epilepsy.”

The oil used in the studies is produced under stringent requirements of the United States Food and Drug Administration by a licensed pharmaceutical company. It contains only traces of THC, the psychoactive component of marijuana. The process developed by GW Pharmaceuticals guarantees the consistency of the product that is provided to study participants.

“The studies thus far show that the administration of CBD oil is a complex undertaking,” said Martina Bebin, M.D., professor of neurology and principal investigator for the pediatric study. “Some patients respond well, but others either have no improvement or experience significant side effects. CBD is not a panacea, and it’s not for everyone. But many patients do have a reduction in seizure activity, and we hope our efforts will further define how to best utilize CBD oil for maximum benefit to the appropriate patient population.”

Tyler Gaston, M.D., a clinical neurophysiology fellow, led a study of potential interactions between CBD and clobazam, a commonly prescribed anti-epileptic medication. The investigators suspected that CBD treatment might cause an increase in the blood levels of clobazam and its metabolite, N-desmethylclobazam, leading to adverse events including sedation. Seventeen patients in the studies were taking clobazam, and investigators found clear evidence for an interaction, with rising clobazam levels during CBD therapy. This finding highlights the importance of monitoring clobazam and N-desmethylclobazam levels when treating patients with CBD, and the results underscore the importance of the new knowledge gained through the UAB CBD program.

A study headed by Leslie Perry, M.D., also a clinical neurophysiology fellow, looked at the effect of CBD oil therapy on electroencephalography, or EEG. EEG is the standard test to measure electrical activity in the brain. The same cohort of 51 patients received EEG tests prior to beginning CBD therapy and then again after CBD therapy had begun. The investigators report that CBD does not appear to have a negative effect on standard EEG parameters. However, the authors acknowledge that the conclusion is limited by the relatively short duration of both the EEG and the length of time from the tests done prior to beginning CBD therapy and then during therapy.

Another abstract, led by Jane Allendorfer, Ph.D., assistant professor of neurology, will be presented at the annual meeting of the Organization for Human Brain Mapping in Geneva, Switzerland. In her work, she evaluated the effects of CBDtreatment on attention circuits in the brain using functional MRI. Eight patients underwent fMRI before treatment with CBD and while taking CBD. Their scanning showed improved activation of brain regions important for attention. The authors conclude that these preliminary results are promising and illustrate the potential of CBD treatment to improve not only seizure control but also cognition in patients with poorly controlled epilepsy.