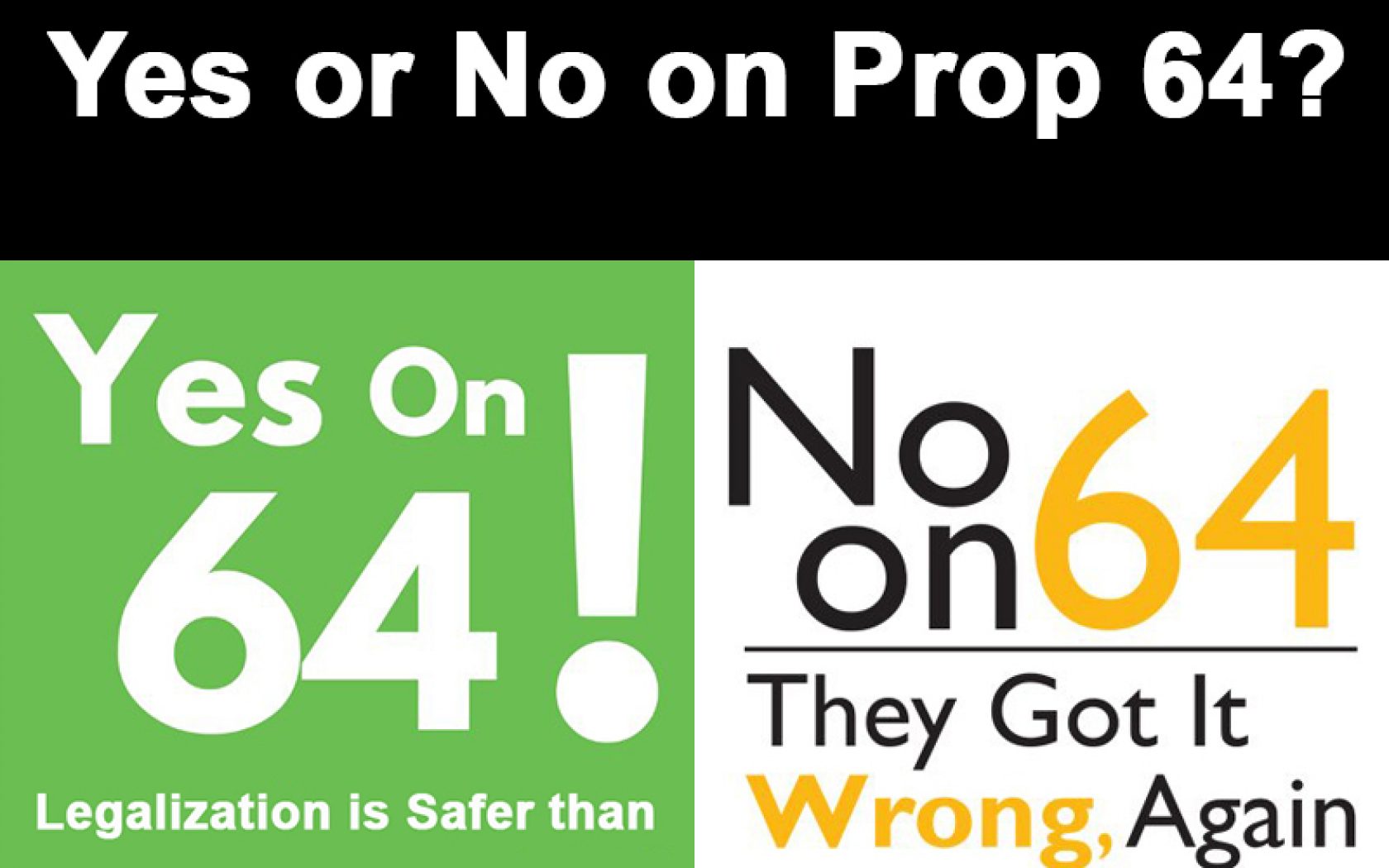 Prop 64, the Adult Use of Marijuana Act (AUMA), has gotten a lot of buzz this election season because it’s the first California proposition regarding legalizing recreational cannabis use since Prop 19 failed to pass in 2010. Prop 19 was ultimately defeated (53.5% to 46.5%) because many felt the proposition was flawed. Opponents of Prop 64 say it’s flawed as well but, those who plan to vote Yes on 64 say the pros far outweigh the cons this time.

We’re not going to tell you how to vote, we’re just going to answer some of the FAQs so you’ll understand how Prop 64 may affect your life (or the lives of your loved ones) if/when it goes into effect. We want you to be able to make your own informed decision, whichever way you decide to vote.

Will I still need a doctor’s recommendation if Prop 64 passes?

That really depends on how much cannabis medicine you need to properly treat your personal condition, because there will be limits on recreational use. If you need more than the recreational allowance, it’s best to continue to renew your recommendation with your doctor every year. Also, as a patient, you will be exempt from paying sales tax on your medicine.

If you’re under 21, you will absolutely need a doctor’s rec to legally obtain your medicine.

What are the limits placed on recreational use?

Will the cost of my medicine go up?

It should also be noted that growers will be paying an excise tax of their own ($9.25/oz of dried flowers and $2.75/oz of leaves) and it would be reasonable to assume that they will pass some of this additional cost on to the consumers.

How much money is Prop 64 expected to generate?

According to the state’s independent Legislative Analyst’s Office, Prop 64 is estimated to generate up to $1 billion of revenue annually, as well as an estimated annual savings of up to $100 million.

Where is the money going to go?

This seems to be a hot point in discussions about this proposition. Opponents are upset that the money would not go into the General Fund, which helps pay for education and health services. However, proponents of the prop point out that most voters don’t trust the Legislature to spend the General Fund wisely (and some voters don’t even know what the “general fund” is for in the first place) so the decision to create The California Marijuana Tax Fund was intended to make the prop more passable.

So, then, what is The California Marijuana Tax Fund?

It’s defined as “a special trust fund established solely to carry out the purposes of the Adult Use of Marijuana Act.” This means the funds will be used to cover state government costs incurred by implementing the prop, such as funding research on legalization as well as research for establishing effective DUI protocols. A portion of the funds will also go toward youth drug education and treatment programs, which will replace jail time for minors.

More specifically, the funds will be distributed annually in the following way:

How would Prop 64 affect children and families?

First of all, if you are a law-abiding patient, your cannabis use can no longer be used against you to restrict your parental rights. This would be a huge relief for many families currently living in fear.

If a minor is caught using cannabis, they will not go to jail. Instead, they will be sentenced to free drug education classes, counseling, and/or community service, and all records of their marijuana-related offenses will be destroyed when they turn 18.

How would Prop 64 change penalties for cannabis possession/use/sale?

Prop 64 eliminates or substantially reduces most criminal penalties for cannabis offenses. This chart illustrates the difference between current penalties and what the penalties would be if Prop 64 passes. 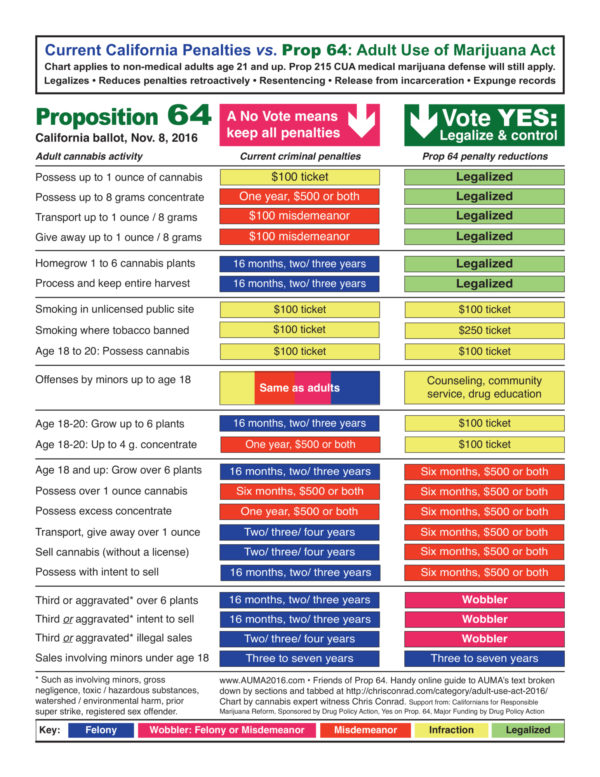 How would this affect those already convicted of cannabis-related offenses?

Those with prior convictions for offenses that are reduced or eliminated by Prop 64 can petition to have their convictions reduced or expunged. This applies regardless of whether they are still in jail or prison, on probation or parole, or even if they’ve already completed their sentence.

How will this affect the Cannabis Industry?

Prop 64 provides for 19 different types of cannabis business licenses, including cultivation, manufacturing, testing, distribution and retail sale of cannabis. Cultivation licenses will be issued for small, medium and large-scale growers.

Cities and counties will have the ability to ban cannabis businesses by passing a city/county ordinance but, if they do exercise that option, they will not receive any of the tax revenue generated by the prop.

Does this open the door for “Big Cannabis”?

That is definitely a fear being expressed by many in the industry, but Prop 64 does address this fear with the following points:

What if I grow for personal use?

Without a doctor’s rec, you will be allowed to grow up to 6 plants per household, “out of public view.”

Does Prop 64 change any of the current medical cannabis laws?

Prop 64 builds on the current medical cannabis bills and existing laws such as Prop 215, and aims to strengthen, not limit, protection for cannabis patients.

Protections added by Prop 64 include:

Again, that’s up to you. Weigh the pros (added protection for patients and their families, reduction of criminal penalties even for past offenses, education/counseling for minors...) and the cons (increased cost due to taxes, the potential for corporations to enter the market in five years, possible mistrust of how the funds will be spent…) and vote whichever way makes the most sense to you. The important thing is that you educate yourself and vote!

Share this article to help anyone else who may be confused by this prop and is struggling to decide which way to vote.