What Do Cannabis Industry Insiders Think About the DEA's Latest Announcement? 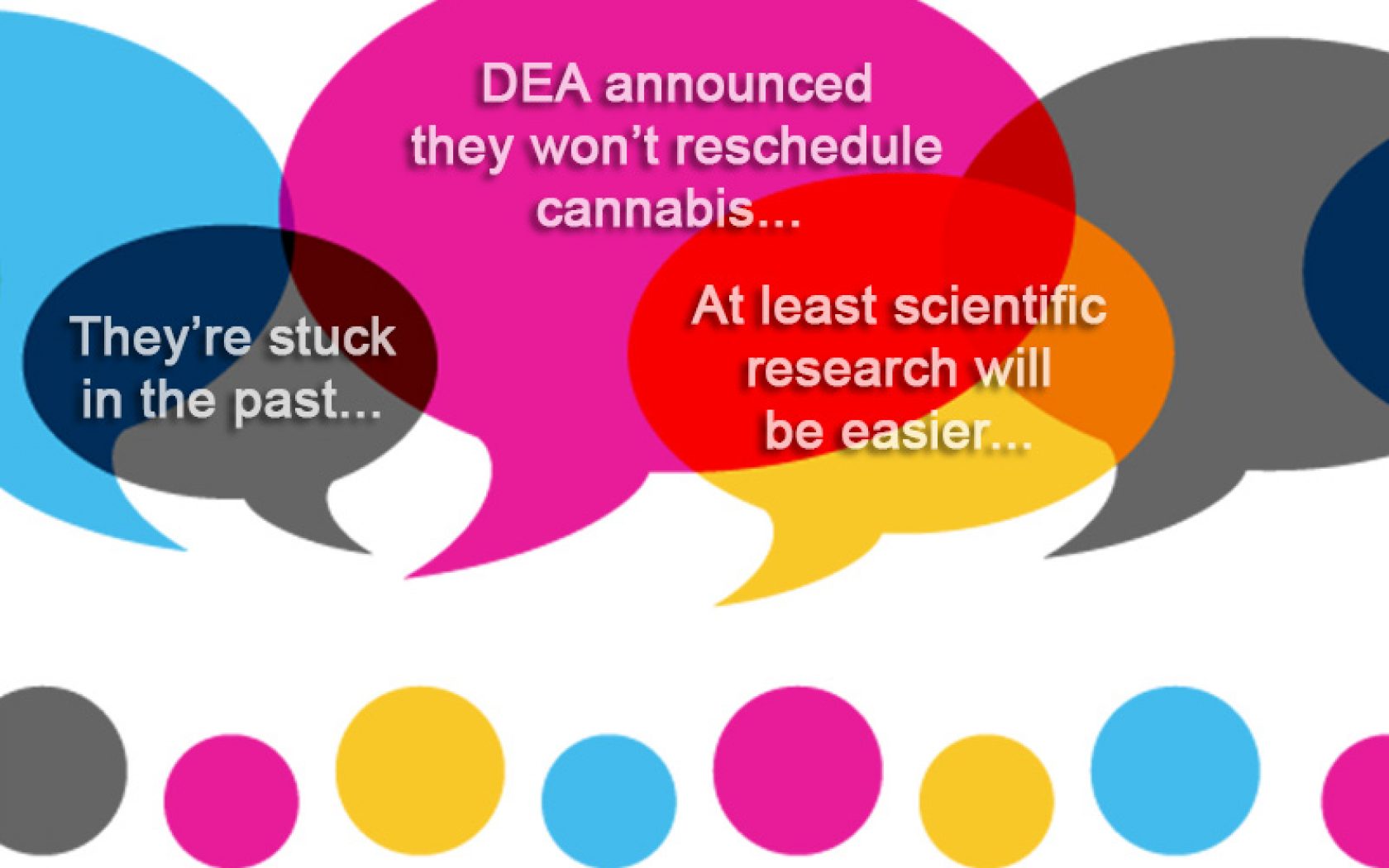 Earlier this week, the DEA announced that they will not be recommending the rescheduling of cannabis anytime soon. An announcement from the DEA has been anticipated for months but, many proponents of cannabis were expecting (hoping) that the news from the DEA would be the exact opposite.

Instead, the plant considered by many to be an effective medicine (including the Department of Health and Human Services which holds US Patent 6630507 for cannabinoids as antioxidants and neuroprotectants) will remain a Schedule I substance until the DEA feels there is substantial scientific evidence that it has medicinal value. Unfortunately, anecdotal reports of the medicinal properties of cannabis are not enough to sway the DEA.

Of course, the reason there has not been enough documented scientific study of cannabis is because it has been very difficult (although not impossible) for American researchers to jump through all of the hoops necessary to conduct a federally approved study of cannabis. Thankfully, the DEA has said they will be making at least one change that will help would-be cannabis researchers: according to a report by NPR, the DEA will "open up new avenues for more people and institutions to manufacture marijuana for scientific purposes." Currently, the only facility that is federally approved to produce cannabis for researchers is located at the University of Mississippi.

DEA chief Chuck Rosenberg was quoted as saying, "As long as folks abide by the rules... we want to expand the availability, the variety, the type of marijuana available to legitimate researchers. If our understanding of the science changes, that could very well drive a new decision."

We reached out to a few cannabis industry insiders to get their thoughts on the DEA's recent announcement. Here's what they had to say...

"Allowing the DEA to set our national policy on cannabis flies in the face of the very rational, science-based approach that the Obama administration has been promising for eight years, and yet again has failed to deliver. Does anyone on earth beside the DEA actually believe that marijuana should be classified alongside heroin in Schedule I as an incredibly dangerous drug with no medicinal value? Perhaps the DEA should spend more time reading the latest research on this plant's incredible medical efficacy, and less time plotting how to bust peaceful citizens for weed.  At least the DEA finally stood up to dispel the myth that marijuana is a gateway drug. It’s about time.

So while HIGH TIMES applauds the decision to end NIDA's monopoly on growing and supplying marijuana for research purposes, it's a sickening shame that so many patients seeking healing and relief through herbal cannabis will have to remain in the shadows of prohibition while we wait for the federal government to catch up to both science and the will of the people.”

“Allowing cannabis to be studied by more researchers is certainly good for the scientific community. It opens up opportunity for researching the cannabis plant so companies like ours can bring it’s full potential to market. But there is much room left for improvement. Without full rescheduling, companies like ours still have to find innovative and creative ways around things like banking issues and access to capital. Larger industries will not be able to enter the market until properly regulated, recreational cannabis legalization happens on a federal level. Until then companies like ours will have to take the risks and deal with the hurdles with the goal of being acquired later.”

“As a company that already does its research abroad, we’ve always been prepared for tricky hurdles regarding scientific research into cannabis. As an advocate and operator within the industry, I personally would love to see the rescheduling of the plant for many reasons, but as an individual with sound logic and reasonable expectations, it is partially pleasing to see the DEA take this small, yet significant step forward.”

“Although this is an obvious ‘step forward’ for those looking to do research into cannabis, the DEA’s announcement still falls quite short of the advancements we need to truly propel the industry and plant forward. The research has been done as far back as The Shafer Report during the Nixon Administration. This is a small step in the right direction, but for me, the main goal for cannabis reform is complete descheduling. The states have lead the way already. If it wasn’t for state governments permitting use of cannabis in various forms, the discussion wouldn’t be where it is today. As they’ve already done, states will continue to do so in order to force the federal government’s hand.”

"The DEA's decision not to reschedule cannabis (or to not remove it from the federal drug schedule altogether) is indicative of a larger trend of irrational concerns being promoted over well-documented defenses of the plant's use in modern society. Given the large and ever-expanding base of knowledge that we have about the many benefits that cannabis provides to patients and taxpayers, there's no legitimate reason that the public should be denied access to it, be it for medical or recreational purposes."

What do you think?

Share this article on social media and add your thoughts to keep the discussion going.